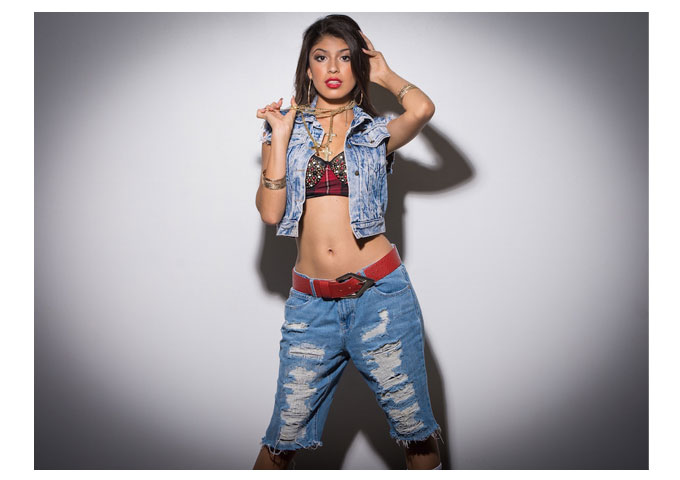 18 year old Jennifer Torrejon aka JGrace hails from Los Angeles, CA. Jennifer grew up embracing her Peruvian and Honduran heritage but living the American cultural dream. She was exposed to both singing and dancing, by her parents at a young age.  Influenced by American pop music, as well as the rhythms of Latin Pop, Salsa, and Meringue playing in the household, Jennifer combined the genres to craft her distinct sound, which encompasses current American pop production with Latin overtones. During high school as well as her current college curriculum, she continues studying music theory, singing, dance, acting and songwriting.

JGrace has released her 80’s Latin Freestyle track “Love Me” featuring Frankie J, which stands all on its own as an awesome, eclectic fresh song from a very beautiful singing, creative and awe inspiring artist young artist.

JGrace’s voice is passionate, crystal clear and original, her lyrics are simple yet intriguing, and the song arrangement balances pop and dance plus the subtle regional flavors that one would expect by a Latina-influenced artist. Also, her musical sources are broad-ranging crossover artists which include Selena Quintanilla, Jennifer Lopez, Enrique Iglesias, Pitbull and Shakira.

JGrace takes the best elements from her influences and combines them all into a snazzy clean pop sound that is totally her own. She rolls over the lyrics, keeping it clear and hitting the different ranges, going at a rhythmical pace that certainly doesn’t let the listener even consider falling behind.

As unique as her voice may sound, she is rather comfortable and familiar singing in both English and Spanish with a wonderfully rich quality, distinctive of a consummate singer. I think it’s great that she retains that quality, and makes it work so well whether singing upbeat or slower songs.

“Love Me” is one of those bubbly pop songs that grabs the listener by the jugular and doesn’t let go until the song is over. You’ll be constantly humming the melody to the song because it just sticks in your head for as long as possible. You’ll also be impressed by the fact that though JGrace is a fine looking young lady, she’s a far cry from many of her Lolita looking contemporaries who trade their talents for overtly sexual innuendo, while seeking the easier route to notoriety.

JGrace is breaking free and being her own person in this respect. She’s sexy, she’s attractive and she flaunts her beauty so tastefully, it’s almost awesome. I think this is such an important theme, especially for today’s youth – where a girl can simply ask a boy to… “Love Me”. Could this possibly be a positive sign of the changing times to come…back again?