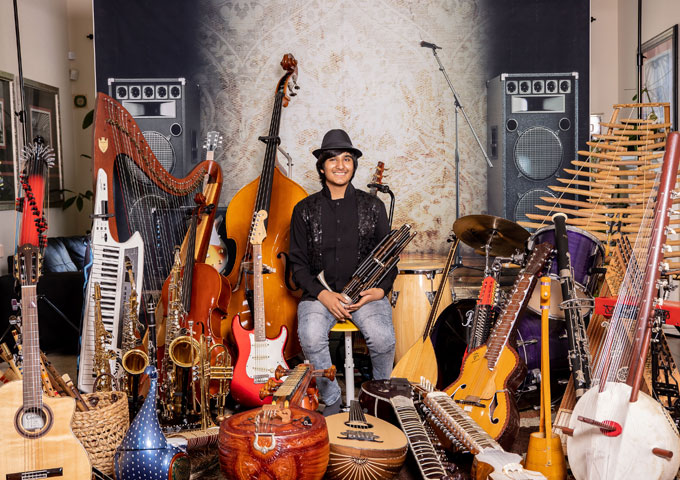 “For Neil Nayyar, the world is filled with symphonies of all the 107 instruments that he has learned to play, as well as his growing expertise in music across a variety of different genres and styles.”

Elk Grove, California– Neil Nayyar, the ultimate musical prodigy and multi-instrumentalist, is perhaps the most valuable musical talent to arrive in this world, and within his short life of 13 years, he has already mastered 107 musical instruments with a specialization in a variety of different genres.

He has already been signed to a contract with an Acting Agency in Los Angeles. It’s certainly a forward step to what his career in the future would look like, and many documents/monologues are currently finding their way to the agency. Once all the necessary formalities are completed and approved, Neil will be sent out auditioning for commercials, TV shows and even movies. He has already auditioned for America’s Got Talent and the Steve Harvey Show, and his popularity is seemingly increasing along with his abilities and skills. Practicing for almost eight hours every day, he has placed a never-ending curve in learning of the musical craft. It’s his passion, and his dedication is apparent to a lot of people at this moment, most notably all his 25 instructors who are all training to increase his expertise and his approach.

Neil also has an article coming out fully dedicated to his story in the August edition of the SACTOWN Magazine. It’s evident that passion is a key part why he’s doing this, and he claims to continually improve with time so that his future presents historic achievements and success in the industry. He has also been featured in many media outlets already, including FOX40, ABC10, Good News Network and many more. He is constantly trying to learn, and these will certainly include a great deal of other instruments too. He has already set a record under ASSIST World Records as the youngest of his like to play 44 different instruments when was just 12 years old, and now it seems the famed Guinness Book of World Records are pretty interested in him too.

The sky is actually no limit for the young Neil, as there is not any in his sight. He’s just begun his journey, and would constantly look to make himself someone historic in its truest sense for a long time into the future. You can check everything about Neil Nayyar at his official website at http://neilnayyar.com/, and you can verily follow him on Facebook at https://www.facebook.com/profile.php?id=100001432454133.

Neil Nayyar’s story begins well before his birth when his parents played a lot of Mozart to hem when he was in his mother’s womb. They attribute this to the reason when, at the age of just five, he went to a drumming class, and after just a single class, impressed everyone present with his unique and once-in-a-lifetime talent. Since then, Neil has fully committed himself to the world of music- first learning to play 44 different instruments by the time he was 12 for which he became ASSIST World Record Holder to become the youngest kid to play the most number of instruments. He is now fully capable of playing one hundred and seven, and his stature is at an accelerated rise. With all the attention he is getting, Neil is fully committed to his interests, which involves a definite adherence to jazz, hip hop and Bollywood music and his love for Bollywood movies, especially those starring Salman Khan.

Rico Christ – “Codex Gigas” – etching out his own distinct realm!