TRENDING NOW
West Ingston – “Men Don’t Cry” paints an eloquent and philosophical narrative | Last Song Bea – “Tara!” is a moment of pure musical celebration! | $windle releases video “Cougar” the official Cougar anthem | The Soapgirls – ‘Heart In Bloom’ alludes to a band built for much bigger things | D. Boone Pittman “She Likes the Beach” – Classic Country Lyrics Meld with Americana Sounds | Paolo Virdis – ‘Confessions Of A Romantic Demon’ lands on 22nd October 2021! | Nicholas Sparks Dalhover – ‘What Happened To All Of Our Watchmen’ | Madi Simmons – ‘Keep On Pushing’ addresses the world! | Big Sailor Baby – ‘I Bet I Can’ represents his out-going energy as a person and an artist | Astrow – “I Pray” is now available on all streaming platforms! |

Between Giants – “Play Dead” is extremely compact, while going through multiple nuances 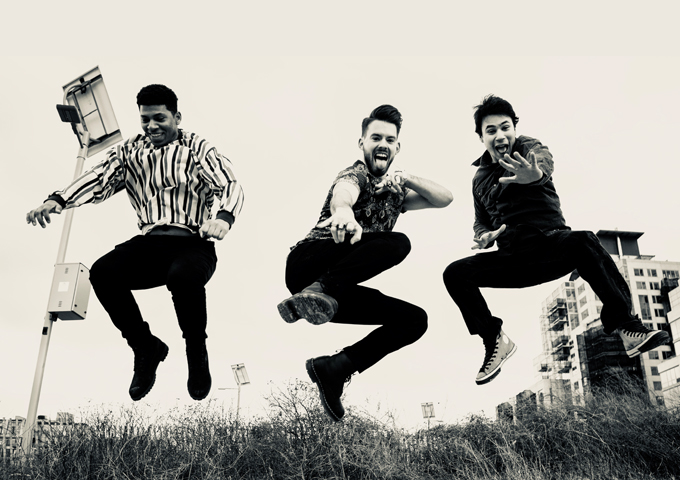 Winners of ‘Best Pop Album’ of 2019 at the Independent Music Award, as well as semifinalists in this year’s International Songwriting Competition, Brooklyn based indie-rock band, Between Giants launch themselves into an eventful 2020. The trio comprised of lead singer and guitarist Tyler John, keyboardist Hans Massaquoi, and drummer Pat Williams, have been pushing serious numbers on digital streams, landed massive sync deals with department stores and radio stations across the US and internationally, and scored a Netflix feature on the Japanese show “Terrace House” and much more.

Between Giants have also opened for heavy hitters such as Lydia, Kodaline, Drake Bell, Jon Bellion, Sea Girls, and The Rocket Summer, while this year the band have lined up a national 21 city headliner tour.

One listen through the band’s back catalog will inform you that their chord progressions, bridge transitions, dynamics of blending in core phrasing of other musical genres on different tracks, while still sounding like they all belong to the indie rock creation of three individuals, are written with such amazing finesse that Between Giants’ music is simply transcendental.

What makes them unique is simply how they approach the genres of pop, rock and indie. Their music sounds kind of like a sonic ride to another galaxy. Now the band release their brand new 2020 single, “Play Dead”. And they add to their past repertoire of sound in an amazingly positive way with this one.

They maintain their glossy, radio-ready pop sensibilities, but infuse it with a definite alternative rock crunch and bite. The band have clearly improved on every level, becoming a very tight, top tier unit. Plus, the production crew’s crystal clear mixing not only enhances all of Between Giants’ strengths, but also successfully blended their cutting rock edge with the gorgeous melody and soaring vocals.

The tune ends up sounding extremely compact, while going through multiple nuances. The heavy-soft contrast is present, albeit in a smooth form. Pat Williams is impressive, showcasing busy, but tasteful drumming throughout. He manages to balance highly technical patterns with breezier ones.

Tyler John does a wonderful job crafting jaw dropping vocals and kick-ass guitar motifs. At the same time, Hans Massaquoi’s keyboard lines are just as ingenious between the band’s interplay. There is no shortage of instrumental inspiration, making it clear the band worked tediously on this track and it pays off.

The “Play Dead” soundscape is one of the band’s most infectious instrumentals, pushing the lovely vocal performance of Tyler John right to the front. The blissful portions – between verse and chorus – are cut by gritty guitars, squealing synths and smashing drums, as everything is carefully and perfectly arranged.

Their engrossing musicianship gives off the sound of powerful determination. This track alone showcases how well Between Giants’ balances their technical side and emotional side with ease. At this point in time, it’s quite difficult for any band to create something that’s both innovative and original, with so much music being constantly released.

However the key is to make whatever you’re doing, engaging enough to grip the listener from beginning to end. In Between Giants’ case, their newest outing completely nails it. They excite due to their energetic passion, gripping songwriting, impressive vocals and ability to transcend any one genre you want to lock them into. “Play Dead” will consistently get your blood pumping.

The song drops officially on the 17th of April.