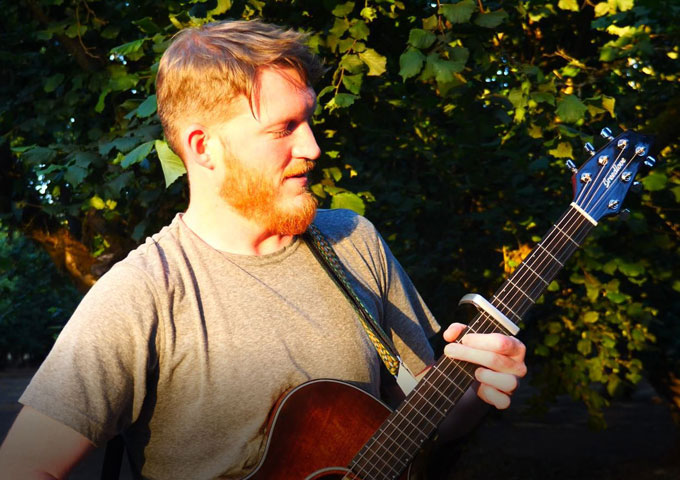 Dan Friese is an Oregon-based songwriter, performer and multi-instrumentalist. In April of 2020, he released his debut EP, ‘Happiness’, a collection of self-reflective psychedelic indie-folk tracks. His first full-length effort, ‘Jane Songs’, was released on September 18th, and is available on all major platforms, along with the singles “Streetlight” and “I Can’t Say”. There’s a lot to appreciate on the new album, and Dan’s voice is arguably the most attractive aspect. Moreover, his vocals are often enhanced by inspiring songwriting and raw emotion, not to mention a wealth of down to earth acoustic guitar strumming. Dan Friese has an organic, easy-going and laid back approach to music and to his delivery. His take on alt-country, folk and other indie flavored Americana motifs, allow his music to breathe and grow around him. The notion of space and time is brought to bear because Dan never rushes too far ahead of the music. It’s always there, alongside his narratives, which more often than not are dark and afflicted, allowing ephemeral rays of light to transpire sporadically.

Dan Friese is a talented singer, guitarist, and songwriter. The latter is perhaps his most impacting talent. Few smart, insightful, and tuneful singer-songwriters in the league of Elliot Smith, Jackson Brown, Warren Zevon, John Prine, Bob Dylan, Jeff and Tim Buckley, etc., are writing music to day. So when you come across music by a singer-songwriter like Dan Friese, it is something to be treasured.

Dan’s music is untainted by pretention, overwhelming ambition, or any unnecessary embellishments which may distract from the core of his songs. From the moment he opens the album with strumming guitars and the harmonica on “Start Breathing In”, you are drawn into his world of introspection and revelation, as he sings: “Some hardened hearts. They can’t be saved. Don’t waste your life Livin’ in pain, You are no martyr. You’re just afraid,”

More often than not, Dan’s music is not cluttered with instrumentation. Primarily acoustic, his vision is carried by a sparse but intelligent carpet of sound, driven by his informed guitar playing. “I Can’t Say” rides on an insistent acoustic guitar rhythm and a banging mid-tempo drumbeat.

“Life’s much harder than it is in your mind”, he sings on “I Thought I Knew”, bringing down the tone and tempo to a deep-thinking slow burn. It pairs perfectly with the romantic balladry of “Streetlight” which is very good piece of writing, sounding like a song that has been around for decades.

“Inner Child” showcases another throbbing drum beat and an up-tempo groove, before Dan Friese transports us onto the beautiful echo of “Open” with its jangly angular guitars. Even with a minimal lyric sheet, the song and the performance show a good deal of depth, with Dan proving he is a whole lot more than just a regular folk singer. “The Beginning” comes as a surprise, as I wasn’t expecting a piano-driven instrumental, supported by a keen guitar melody.

There really are no skippable songs on ‘Jane Songs’, except ones you may like better than others, in this case, “The Call” belongs to the latter. Echoey and visceral, guitar and voice blend in what sounds like a live take that will resonate with the listener, as Dan sings: “Everyone seems brighter. But I’m just getting dull. Tie this noose up tighter. Til I fall.”

The picked guitars and poignant percussion on “Stop Bringing Everybody Down”, introduces yet another stellar track, adorned with poetic lyrics and Dan’s deep-set voice.

“This life is perfect. Then it’s hell. How I’ll feel tomorrow. I can’t tell,” are the opening lines to the final track, which may just be the best of the bunch, depending on your taste. Smooth and laidback, yet rich and evocative, this song packs a strong emotional punch, as does much of the album. Dan Friese may not be the name on everyone’s lips right now, but with a few moves in the right direction, he might soon be.

314Fontaine – “Not Regular” – a great deal of inventiveness and craft!

Chad Nathan – “Wins and Losses” ft. J.See – head-and-shoulders above many of his contemporaries