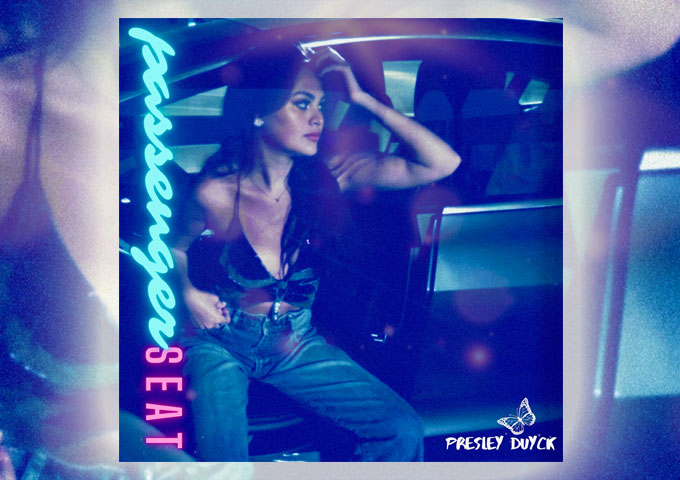 Once you press play on “Passenger Seat”, Presley Duyck’s sound is special from the start—a lyrically driven, rhythmically compelling blend of folk, pop and indie-rock, all placed under a sturdy radio-ready overhead. There is a blend of attitude-fueled confidence and self-ownership, together with resonating and earthy vocals which stand out completely from the instrumental. Presley has developed a technically layered and luscious sound, which is the real sign of excellence fans can look forward in this, her debut musical installment. The guitars, executed by former Alanis Morrisette lead guitarist and film score composer, Nick Lashley, jangle and scream, adding a powerful depth and dimension to the track.

Regardless of how the single’s production is drawn up, it is all guided by Presley Duyck’s knowing instruction. “I have been singing and playing for years, but songwriting was born out of necessity during quarantine,” she was quoted as saying in an article recently. “When writing, I go where the wind takes me – I usually hear a lyric first and play chords and see what comes to my head first. Then, I’ll take to my journal and write out exactly what I am trying to say. That way, I don’t get lost in the song; I want every lyric to have intention. I know that my lyrics are ready when they are colored with lots of visuals and the wordplay feels witty.” And lyrical intention, is exactly what “Passenger Seat” achieves, as Presley Duyck unfolds the devastating theme of isolation and chronic loneliness. It sketches an impassioned woman of many complexities searching for a greater sense of understanding of herself. The opening verse and chorus are forcefully compelling:

“Breathe deep. Drive slow. Going down the west coast. Four best friends. Down the road. We plan on never ever ever coming home. But they don’t see. They don’t know. Even next to my friends I feel alone. Hello can anybody hear me. Yes you in the passenger seat. I’m dying to feel less lonely. But maybe by now I should let it be.”

As a songwriter and conceptualist, Presley Duyck executes the track flawlessly. Whereas producer Chris Garcia kept the song’s melody and harmony lockstep with its steady rocking rhythm, Presley’s ability to find the sweet spot between all the musical elements is remarkable for a debut release. She navigates the shimmery interface of electric guitar and driving bass that recalls a bit of vintage rock flash and modern pop flair.

“Passenger Seat” is an excellent track that deftly captures the complex emotions of being alone in a crowd. It’s a well-crafted single with conviction, skill and Presley’s muscular, soulful voice navigating seamlessly between singer-songwriter, pop and fuller-bodied rock flavors, all under three minutes, in one single song. Surprisingly, Presley Duyck is already well-aware of what she does best, but if she’s willing to constantly push those abilities as far as they can go, the levels she may reach could be exceedingly high.

MORE ABOUT: 20-year-old Presley Duyck is a Frisco, Texas native who has been singing her entire life. Right before the pandemic in 2020, Presley was cast in a dream role in a dream show. When the show was abruptly cancelled, Presley was left with no creative outlet during one of the most challenging times in her life. So she turned to songwriting. Presley’s hard work, songwriting prowess, and hearty vocals come to life on her debut single “Passenger Seat”. The single is available now on all streaming platforms. You can catch Presley Duyck’s EP, “Leo Moon” later this year.