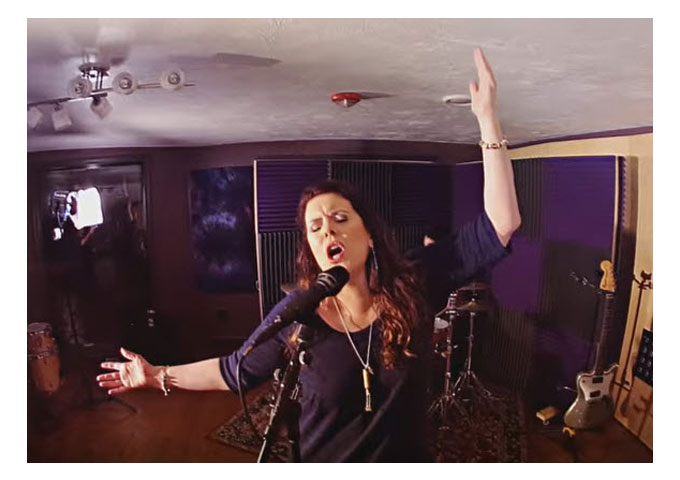 Cyndi Creswell Crook’s music could typically be labeled alternative rock or simply rock. In truth Cyndi’s music is neither; her music has its own genre, earmarked by poetry, passion, keyboards, guitars and percussion, used to create an entity that stands apart. As a poet, Crook’s writings can be abstract and difficult to connect with, but when formed into song, the spirit and passion behind them is evident enough to make the listener understand what she wants to communicate, and the vitality of her message.

Cyndi Creswell Crook’s four octave voice wails, wallows and engulfs – a soft vibrato making itself known during quieter moments while her primal growl dominates through her up-tempo numbers. Cyndi’s video performances, creatively produced by Keep The Edge Studios, serve as proof that when performing, she really is transported to another place, one the listener can easily get sucked into, be it during the driving chant of “Zombie Wonderland” or the slow burn of “Cloud” which both paint an intensely vivid picture through narrative.

Cyndi could even be known as an Avant-guard beat-style poet. Her songs are a collection that slaps the listener from explosive rampancy, like on “Placebo Effect” to lotus-like lyricism on “Would You Tune my Air Guitar” and then back again. “Zombie Wonderland” pounds rhythmically, while the lyrics alone are enough to transport one into another state of mind. The guitar-laden music drives and swoops, undulates and screams, while Cyndi comforts and terrorizes between the sacred and the depraved spirit, the hungering body and the soaring heart. The 3-minute “Zombie Wonderland” sounds like old fashioned rock and roll turned into something magical with special thanks to Cyndi’s vocals. She manages to turn old style rock n’ roll into something you want to pay attention to instead of just tapping your feet to.

Cyndi Creswell Crook packs all the creative intensity and poetic release of an artistic blend between Patti Smith and Grace Slick. The band is also tight on “Zombie Wonderland”, while Cyndi’s articulation and phrasing, adds further driving energy, to make this recording a compelling listening experience. All-in-all Cyndi Creswell Crook is a passionate weaver of words and sound.