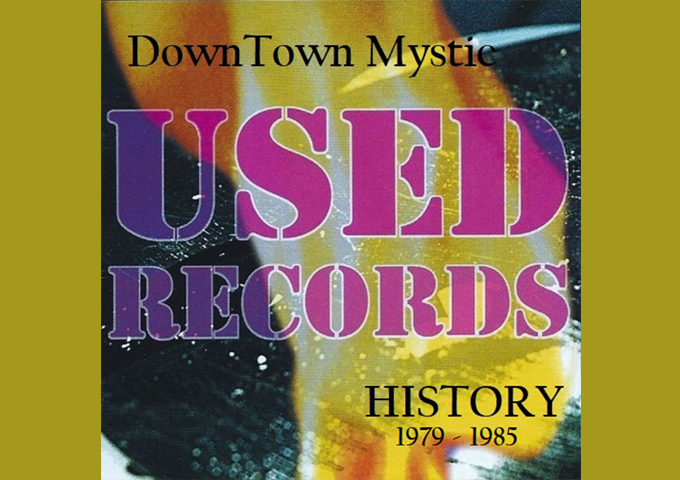 The worldwide release of the new “DownTown Mystic: Used Records History 1979-1985” album, puts US rock project  DownTown Mystic helmed by Robert Allen, in that rarefied group of musicians who live and work in the present, look to the future with inspiration, and are still able to embrace an illustrious and unforgettable past. The album, digitally distributed worldwide via The Orchard/Sony Music, has been available across the globe since November 6. Sha-La Music has also been promoting the album with a new music video every week up to release date. The album was preceded by the stand-alone 3-Way Heartbreak single which has been raking airplay over 100 stations in 17 countries.

The idea for releasing an album of previously unreleased pre-DownTown Mystic material came from renowned British rock journalist Nik Cohn. On doing research for a book, Cohn traced a timeline that led to The Tupelos, who were linked to E Street Band bass player Garry Tallent, and ultimately Robert Allen who figured in the band’s earliest configurations.

During the pandemic, Allen found the time to go back to that earlier material, uncovering a wealth of original song versions of tracks he had released later on, including Turn Around and Go and Modern Ways, the last single from Better Day. Digging deep into the crates Robert Allen pulled out 12 rock n’ roll gems coming from between the 70’s and 80’s.

Melting guitars, snapping drums, running keys, and pulsing basslines chug alongside shiny melodies and rich harmonies, in a collection of songs that have absolutely stood the test of time. These tracks reflect many discerning observations of their time, as well as all the universal themes of love and loss.

DownTown Mystic, along with the original collaborators, crafted these nostalgically tinged, organically rocking songs with solid hooks and tough, sometimes tender melodies energized by the group’s typically muscular playing. All of which is delivered with the DownTown Mystic’s distinctive blend of emotional, heartfelt performances.

It’s worth checking out this collection because it captures some truly great moments from DownTown Mystic, as well as being the best document currently available of their earlier past history. The album opens up with The Tupelos featuring Garry Tallent on the track “Please Be There” from 1980, and then follows up with vinyl single, also featuring The Tupelos, entitled “Sweet Little Sixteen” from 1979.

The opening triad of knockout punches, includes “Sweet Lies”, again recorded with The Tupelos during 1979-1982. From there onward, it’s a storm of DownTown Mystic solo project releases and demos. Robert Allen has an amazing touch and this record sounds just as sharp as any other of his studio records, which really helps clean away some of the air and echo that usually comes from hearing recordings this old.

From standouts, “Baby Believe Me” to “I Just Want To Love You”, and “Turn Around and Go” to “Fly Like The Wind” and “Modern Ways”, I can vouch that DownTown Mystic sound crisp as hell, which only makes me like this album even more, as it enhances everything that makes this band great. “Fly Like The Wind”, recorded in 1985, has even become one of DownTown Mystic’s top sync-licensing tracks.

Furthermore, to hear these songs with Robert Allen’s full storyteller flare behind it, makes for some of the most thrilling rock n’ roll songs out there. DownTown Mystic have always had a knack for letting their songs drive around, to really explore all the emotional tones of their arrangements.

That is what makes DownTown Mystic: Used Records History 1979-1985 such a definitive piece of the DownTown Mystic catalog. It captures the band at its best and shines a light on all the different places Robert Allen and DownTown Mystic would eventually go musically.