TRENDING NOW
D. Boone Pittman “She Likes the Beach” – Classic Country Lyrics Meld with Americana Sounds | Paolo Virdis – ‘Confessions Of A Romantic Demon’ lands on 22nd October 2021! | Nicholas Sparks Dalhover – ‘What Happened To All Of Our Watchmen’ | Madi Simmons – ‘Keep On Pushing’ addresses the world! | Big Sailor Baby – ‘I Bet I Can’ represents his out-going energy as a person and an artist | Astrow – “I Pray” is now available on all streaming platforms! | Tony Ross – “Pressure” – loud and proud charisma, and rich variety in the production | Positive Vybez – “Body Language” – a groove-driven and distinctive urban track | YelleSavage can’t wait to take everyone on her journey of successes | T. Ka$h – “Glass House” is evocative of past hip-hop classics! |

JACK OF NONE: “Who’s Listening to Van Gogh’s Ear?” – is made of that good, solid rock fabric! 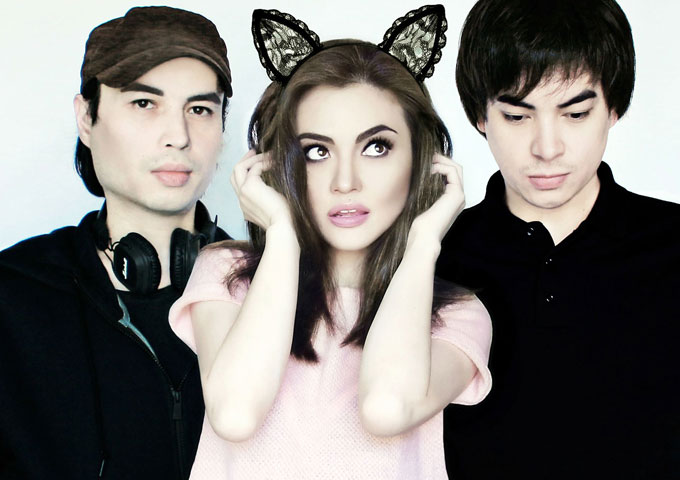 It’s not very often that I’m left open-jawed in amazement by a band. My friend suggested that I check out this poetic, experimental art-rock band called JACK OF NONE made up of siblings A.G. Syjuco (principal composer on guitar, bass and synths), Maxine Syjuco (poet-songwriter and vocalist), and Julian Syjuco (guitar)

The band’s debut album, “Who’s Listening to Van Gogh’s Ear?” was released globally in April of 2016. What makes them different at first glimpse is that Maxine Syjuco uses the spoken word rather than actually sings.

She recites a mosaic of stories and anecdotes, from the dark underbelly of society as she grapples with life’s harsh realities and its daily grind, as well as the reservoirs of the ingeniously obscure crevasses of her mind. The musical style ranges between indie to full-blooded art rock, with great emphasis on the spoken word delivery and the complex musical arrangements.

The tracks are all full of contrasts, and album requires you to make an effort to understand it. The lyrical twists and turns may leave you puzzled in places, but in others it exposes situations with intuitive insight. The more I played it, the more I fell under its spell….it’s strangely addictive.

Raw, brutal, and beautiful, I put this on when its late at night, close my eyes, and feel the emotion break down my barriers and build me back up and feel renewed. This is what music is all about. No, this isn’t the only type of music, but if you can’t sit and feel like this, with what you’re listening to, then you’ve missed the transcendent power of music.

If you do like good lyrics and storytelling, there are many lines here that are packed with so much imagery they will just explode in your mind. So you will have to start pausing the music and get yourself stuff together before venturing into the next intense onslaught. Try “Confessions of a Chop Chop Lady”, “(But) Noise” and “Fire Song” as a prelude to the apocalyptic intensity this band is capable of, both lyrically and instrumentally.

Musically, “Who’s Listening to Van Gogh’s Ear?” is made of that good, solid rock fabric of crunching guitar riffs and complex rhythms with enough twists and turns that always sound fresh and not over-rehearsed-to-sterility, but extremely tight.

JACK OF NONE sound like they have lots of good music in abundant supply, like they could cut a hundred records today if you just let the recorder keep rolling. This is probably an illusion of their style, as they have so much going on at any one time, but it’s a darn effective illusion.

It is only once in a great while, that an album comes out which is more than simply music and words – an album that can be described as nothing less than art. Few bands are capable of producing such an album. I believe that with “Who’s Listening to Van Gogh’s Ear?”, JACK OF NONE has recorded a truly special album, an album that as a whole is much greater than the sum of its parts – And some of its parts are truly immense, specifically, “There Was A Crooked Man” and “The Witherling” which feature amazing guitar work and some extremely creative voice arrangements.

JACK OF NONE is one of those bands that are almost impossible to describe through words. This is a band that needs to be listened to. They will take you through a musical odyssey you may never have traveled before, or at the very least, you were never ever expecting to explore.

Very left-field and at times extremely macabre, “Who’s Listening to Van Gogh’s Ear?” sounds like an intense, harrowing, glimpse into someone’s soul. Rest assured, everything else you ever listen to this year will sound cheap, in comparison to the multi-layered emotional tapestry on display here.