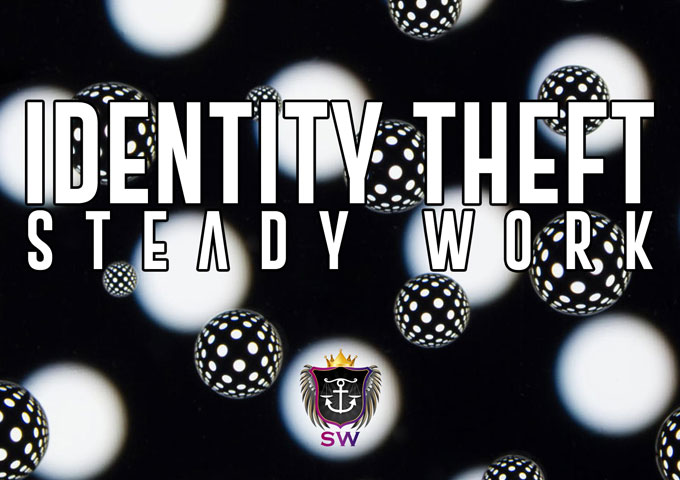 Dallas Schwake aka Steady Work, is an independent music artist based out of Colorado Springs, CO. Originally a Mississippi Native, Dallas moved to Colorado in 2012 where he attended the United States Air Force Academy. Instead of continuing a career in the military, Dallas – a multi-instrumentalist – voluntarily left the service towards the end of 2013. For the past few years, he has worked in several different industries and positions while simultaneously honing his music abilities in order to support his dream, his wife, and his son. This month sees the release of Steady Work’s debut album entitled, “Identity Theft”. Previous attempts to blend hip-hop, country, rock and blues have ranged from good, to amusing, to corny, and just downright embarrassing – and I won’t mention names, but now someone has finally done it right. There’s nothing gimmicky about Steady Work’s debut album; he’s blending genres not to be cute but to serve the fistful of terrific songs he’s written.

Steady Work also defies the biggest taboo in rap by dropping the macho pose to acknowledge any personal errors, issues or weaknesses. He gets away with it because he never whines and always accepts his share of the blame. He is also not afraid to share his religious beliefs and the strength of his faith and how this helps him overcome any difficulties.

In today’s many well-defined fields of music, only seldom someone comes around to create something that can claim to put a new style breaking twist on things. And that’s not even discovering new areas, but just managing to stray away from the same old ones.

With “Identity Theft”, Steady Work creates an effort like that, as he combines Americana and Rock with a Hip hop point of view, touching the preaching and introspective, to provoke the listener with glimpses into situations that people usually hide behind blinds.

One hell of a lyricist, an incredible singer and a rapper to boot, Steady Work is a powerful songwriter and an even better storyteller, one capable of evoking an emotional response at each and every turn. This is a real life record, one that reflects the trials and tribulations we all may face along the pathway of our lives. Plain and simple, the lyrics, the words, and the thoughts heard throughout these tracks, are relatable.

“Identity Theft” is an under-the-radar record that you’re much better off experiencing rather than simply reading about. No matter from which end of the album you start the change in style and feel from track to track is radical. From the lush Americana, acoustic-driven track “So Much More”, to the deep, dark and edgy bass booming rap-rock of “Dazed For Daze”, and the throbbing percussive hip-hop themed verses of “Hold The Line”, Steady Work lays his full throttle powerful gravelly vocals out for all to hear.

His singing soars and emotes with the same visceral energy he rhymes through the rap verses. There is hardly a notable difference between his ability to execute one or the other form of perpetuating his storytelling lyrics.

When it comes to forging sonic gems containing strong melodies, smooth rapping and powerful singing, the album standouts for me, besides the aforementioned tracks, have to be: “Identity Theft”, “Never Had Much”, “Full Spectrum” and “To You”, with a toss up for the absolute album diamond, between “Hold The Line” and “Dazed For Daze” – easily among the best songs of any genre I have heard all year so far.

These days, with so much bad music constantly being shoved in our face, it’s suffocating. Steady Work brings a breath of fresh air with “Identity Theft”. It’s one of those albums you can actually listen to all the way through…without even worrying about genres, they’re all inside here!