TRENDING NOW
Fully Bold – “Drinking Lies” – way out in front of the pack! | 3Mind Blight – “Paranoid” is rhythmically mesmerizing, incredibly progressive thinking and vocally superlative | AfroTech Müzik presents: Frank Delour’s latest hit ‘Walking In the Rain | DeusExMaschine’s Soundscape: A Blend of Disco House and Tech House | MOXIE – “Hypnotized” – a powerhouse track that will leave you wanting more | SoundMixer Abder – “Dancing Jazz Music 2022 (Remix)” – blending the traditional and the contemporary! | Presley Duyck – “Daniel Caesar” is so perfectly constructed | GEEYO IBRA: The First Lebanese DJ to Perform at the FIFA World Cup | Official Music Video – “One More Reason” by VoltageHead | Realtopgreez Luciano: Music is another way for him to reflect on his past | 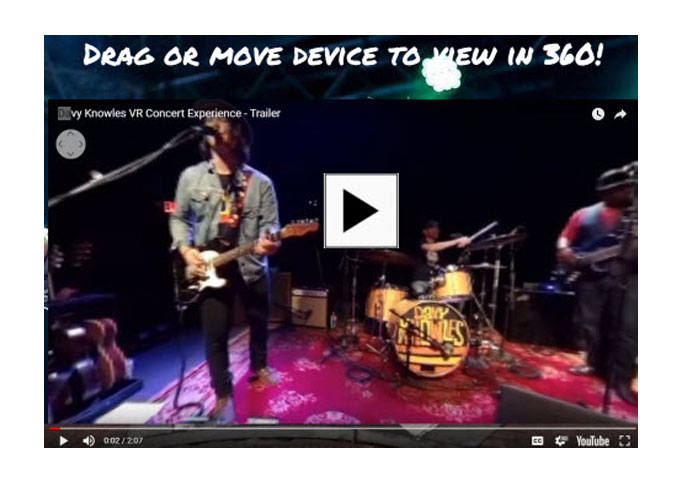 Jacksonville, FL. Blues Guitarist Davy Knowles – dubbed the “modern-day Blues Man” has accomplished a lifetime of achievements at just 30 years old. His music was selected to broadcast from Mission Control into space on the International Space Station. He has shared the stage and/or played alongside with countless legends including Joe Bonamassa, George Thorogood, Buddy Guy, Kid Rock, Joe Satriani, Warren Hayes, Jeff Beck, Chickenfoot, Sammy Hagar, Peter Frampton, The Grateful Dead and more.  He was on the bill on Bonamassa’s prestigious “Keeping The Blues Alive at Sea II” cruise. He produced and released a documentary called “Island Bound” featuring Martin Simpson, Richard Thompson and Peter Frampton. He was named a top 10 modern blues artist by Gibson Guitars.  He appeared on CBS Morning Show and Jimmy Kimmel.  He’s had 3 top-5 Billboard Blues charted albums.

AND NOW, he has yet another amazing accomplishment to add to the list.  Davy Knowles’s new fully-interactive 3-D, 360/Virtual Reality concert experience app developed by 1:9 Technology was released this week.  The app offers music fans the ability to watch, on demand, the entire Davy Knowles show recorded in 360 ° at Higher Ground in Burlington, VT.

A truly unique experience, the app can be used with google cardboard in 3-D 360 ° – or without in 2-D 360 °. A truly interactive experience, the user has the ability to select individual songs, or to watch a behind-the-scenes interview with the artist, allowing the user to be completely immersed in the experience.  In app controls include Play, Pause, Return Home, or move to a particular spot in the video, giving full control to the user. For those who do not own a Google Cardboard headset or prefer to watch in 2-D 360 ° on their mobile device, a non-Virtual Reality mode option is available from the app’s home screen.

To get a peek of the app, click the link here: https://www.youtube.com/watch?v=161ECou2sLE

1:9 Technology’s CEO, Tim Hogg said on the release: “There truly is nothing like this available on the market today. It’s exciting to be at the forefront of the future of Virtual Reality in the entertainment industry.”   It will also be available for purchase on Vimeo, viewable on a desktop or in Virtual Reality through the Vimeo app. Future releases will potentially include Oculus Rift and Gear Virtual Reality compatibility.”

Get a peek of the app at davyknowles360.com .  It’s available for downloads on Google Play for Android and in the iTunes app store for IOS.

About 1:9 Technology LLC: 1:9 Technology LLC is a Jacksonville, FL based virtual company specializing in 360 video interactivity and immersion. Formed in early 2017, 1:9 Technology employs a variety of talented individuals with backgrounds in software and VR development, as well as film production and editing. Using the latest in 360/VR technology, 1:9 Technology strives to bring innovative and exciting experiences to audiences at an affordable rate.