Billy Roberts and the Rough Riders: “Go By Myself” – out of this effort springs some transcendent music 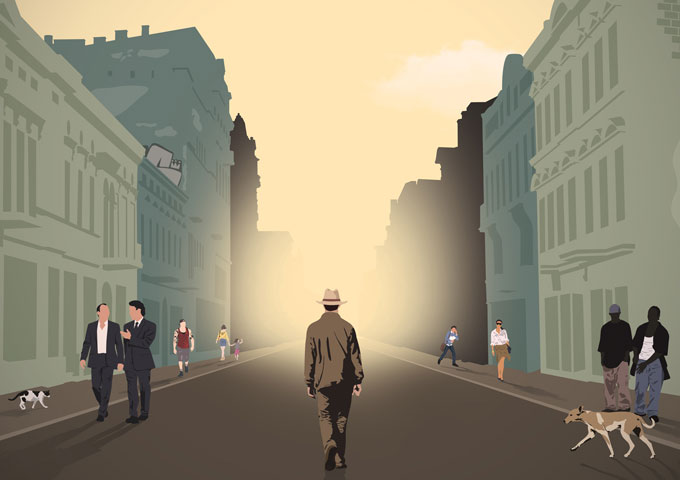 Billy Roberts and the Rough Riders are a country rock/alternate country/hard rock/blues/folk band based in Australia. The Rough Riders released their debut album “The Last of the Originals” in August 2014, getting solid reviews with their brash country rock sounds. The Rough Riders are back with their second album “Go By Myself” released in October 2015. The 11-track album is a beautiful and haunting album. The grungy, distorted guitar and wavering voice of Billy Roberts are layered with the throbbing rhythms and stabbing leads of the band.

“Go By Myself” is a big smoldering, shuddering recording that sees Billy Roberts and the Rough Riders at their best. I have found album alternately indulgent, inspired and irresistible, many times within the same verse or section of improvisation. Both the lyrics and the musicianship could occasionally be mistaken as the efforts of a classic singer-songwriter from the 70s; for an artist in the modern music era to accomplish this effect is remarkable. Some of the music skates right on the edge between retro Rock and Americana now, and out of this effort springs some transcendent music. We are listening to an authentic musician, alternately channeling the sensibilities of a savant and a shaman. The raw primalism and the intractability of modern vision are entrancing.

“Go By Myself” is a singer-songwriter album created by a full band. It is the work of an incredibly powerful wizard, hurling lightning bolts of raw rock across the globe from down under in Australia. The opening track, “Beat Down and Broken” acts as a kind of sonic air lock, decompressing the listener into the album’s atmosphere. Or perhaps a better metaphor would be – a time machine. On tracks like , “Hard Times”, “Seen it All Before”, “Who Do you think You Are”, “From The Ashes” and “Gone To The Dogs”, The Rough Riders create songs that are musically engaging, driving and confident, with jams that engage the ear and the heart. There are also hauntingly melancholy slow burners with great chord progressions, like “Kayla”, the title track, “Go By Myself” and “Goodbye Old Friend”. All-round there is little self-indulgence and a huge amount of real musical substance in these songs.

There’s almost a symphonic-like attention to the raw rock n’ roll sound which makes the sonics as equally powerful as the lyrics, bringing out the melodies and making the record even better than Billy Roberts and the Rough Riders’ previous release. As it is with most artists, you either like what The Rough Riders do or you don’t. If you do, you’ll love this album. These guys do here what they do best: straight ahead 4/4 Americana-influenced rock and roll with the basic guitars, bass and drums format, sprinkled with keyboards and a few other chosen delights.

The mix and production are excellent, allowing just a bit of the grunginess that is the hallmark of good rock and roll. No sanitized overproduction, no annoying overdubs, no smothering electronics. “Go By Myself” makes you feel like you’re right there listening to a live take in the studio with Billy Roberts and the Rough Riders.