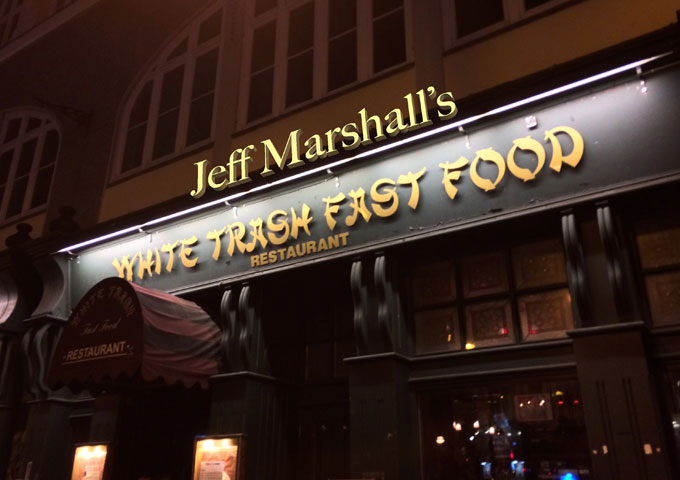 “I had an amazing time there – I got a great American style burger, saw the British punk band The Vibrators, and got a dragon tattooed on my back – all in one night,” says singer-songwriter, Jeff Marshall, of the now closed White Trash Fast Food Restaurant in Berlin. The Philadelphia, PA based artist visited Germany in 2014, and was so impacted by the venue that he entitled his latest 7 track album by the same name. Right off the bat, I’m totally loving Jeff’s skills in writing the most interesting material I’ve heard in a long time. It’s pretty hard to hear a more unpretentious and down to earth soul in the music business. Be prepared for traditional tones and timbres, as well as some unconventional soundscapes, as Jeff Marshall blends rock, blues, electronic and anything creative he can throw into the mix. The variety of styles on this album is staggering. As the album notes sustain: “There is something on the menu for you at the White Trash Fast Food Restaurant.”

How the heck anyone could conceivably combine all the twisted aspects to their musical vision in only seven tracks is surprising to say the least, but Jeff Marshall succeeds with ease. “White Trash Fast Food Restaurant” is one of those albums where every track has something unique to offer. This is the result of mixing genuine musical genius with plenty of heart and boldness. No attempt is made to pander to radio clichés or modern stylistic tendencies, if not in the use of electronics and some sampling.

The album kicks off with “Plain Like Money” which is all orchestral, as the dirty guitars kick in to support Jeff’s deep growling voice, in a song that builds in intensity and momentum. He delivers the lyrics with a truckload of passion and you can practically hear him sneer, as Jeff’s voice powerfully permeates the mix to ensure his words are heard clearly.

“Give It Up” is a mid-tempo pastiche of synth, rock and blues, with a South Asian twist. Marshall boils it all down to bare essentials and blows it up with vigor on the mic: “Cause when everything you have to give, isn’t enough, you have to find the strength inside…and give it up.”

If any singer deserves the title ‘acquired taste’, it’s Jeff Marshall, as his vocals have go from rough to, well, rougher, on the swampy blues groove of, “It’s a Secret”. And once you’ve acquired the taste you’ll be hooked by its warm abrasive tones. His voice tell a story. It laments or explains in a passionate manner. It comes from the mouth of a born storyteller.

The reggae leanings of “Relax” comes with plenty of rumble and kick, as Jeff’s gravelly voice pounds the lyrics with both grit and tenderness. “The Big Payback” rides in on a James Brown sample, as if to prove that Jeff Marshall works outside the box.

“Didn’t Pay The Rent” mixes soul and funk groove, with edgy urban rapping in a song that once again confirms how well Jeff Marshall’s rustic musical settings blend with his gravelly voice, and eclectic creativity. The title track, “White Trash Fast Food Restaurant”, emerges as a foot-stomping gumbo motif that kicks ass. It injects adrenalin into a story-line gripped by the twists and turns of existence.

“White Trash Fast Food Restaurant” is the kind of album that you put on when you’re doing nothing else, and upon hearing it multiple times, lyrics and lines begin to stick out to you and when you actually hear them, they blow your mind.

It’s an album composed of intensely dramatic narratives that are complimented by dynamic instrumentals. This recording sees Jeff Marshall at the top of his game and imbued with sense of musical maturity and a serious intent of purpose.